If you’ve ever worked in email, or any form of digital marketing, you know that A/B testing is a standard practice that you should be doing on a regular basis. In fact, we A/B test so much that we were told we were all getting tattoos with the words “Google Optimize” on our arms at our next retreat (kidding). But in all seriousness, the secret to the sauce is making informed decisions using the findings from the testing that our team so rigorously does.

Part of running good tests isn’t just taking the data, digesting, then regurgitating into a report. Analyzing why something works is the key to understanding how you can replicate that tactic in other things. Our team recently had the chance to encounter a series of emails from someone claiming to be Josh (#catfishing). The emails raised a lot of eyebrows, caused a lot of “Uh, does anyone know if this is real?” conversations, and ultimately, led to plenty of laughs.

But within those fantastically phishing traps, were gold nuggets that we could use as takeaways. Every opportunity is an opportunity to learn, even if that thing is fake emails from your agency founder. So, below is a list of things our team learned from these spam emails that we think are great takeaways for usage in the future. 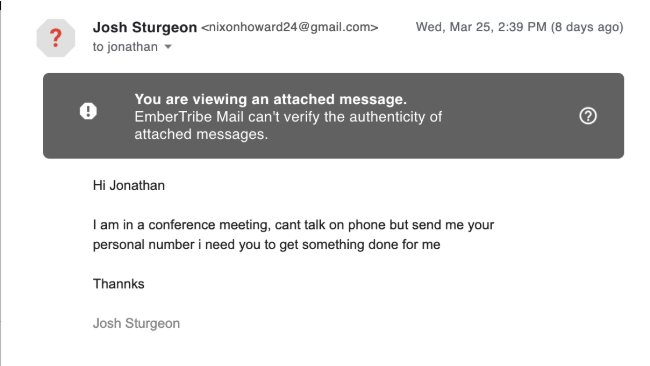 You may be still shaking your head, and that’s okay. The first step is denial, and we’ll work through that.

But here’s my challenge to you: Ask yourself why half of your marketing emails work. Do they scream, “Buy my thing!” or “Hey we have a sale dangit!”? They probably don’t, just like a phishing email probably doesn’t yell, “Hey! I am about to totally hack you!” Instead, they use marketing tactics that we’ve all used to increase conversions. In the email above, they’ve got one element that is a standard and for us in agency, works across the board—personalization.

Using it in the copy or even in the subject line always increases open or click-through-rate. In this case, it makes our team take a second glance at that email, because if “Josh” knew who we were, then maybe he’s not a catfish? It creates trust, and trust in a brand (or a catfish) is one of the keys to increasing conversions.

2. Make it personal, but not that personal 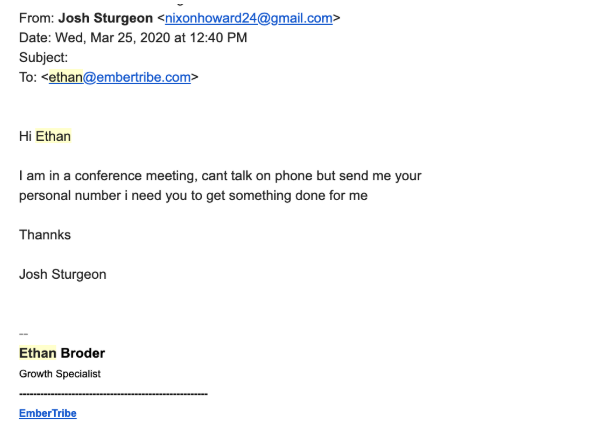 Asking for someone’s personal number seems strange. Let’s just throw it out there. While plenty of people have a work phone, or a cell phone, typically the people you work with, have both numbers in case they need to reach you.

It’s ok to get personal with your audience, but not that personal. The key here is knowing your audience. Our company doesn’t have work phones, so the idea of a personal number is mostly foreign to us (honestly catfish people, I’m disappointed).

If you don’t know your audience, and start to speak to them in a language that sounds alien to them, they’re going to raise their brows and unsubscribe faster than I hit “Mark as Spam” on these emails.

Instead, take the route that the catfish took in the second email. He asked for Jonathan’s (a super Google star here at ET) “cell#.” While there’s spacing issues here, typos, and still it’s weird that he’s asking for the cell, the email does look like Josh potentially typed this out really fast between meetings or on the go—and if he was on the go, maybe he didn’t have time to look for Jonathan’s cell phone number, which is why he proceeded to ask?

Now the wheels are turning and we can see how our minds start to justify something as being legit, once the author of the emails starts to talk to us in a way we understand. Because Josh is a busy person, and as a founder of our agency, it could be likely that he only has time to ping us a quick email or slack for help on something.

So for you, fellow marketers, make sure that you follow the second example, and talk to your audience in a way that is familiar to them. Do your research. This is your chance to be Veronica Mars and do some major creeping on your audience like this hacker (unsuccessfully) creeped on all of us.

Besides the glaring yellow “Beware” banner, there’s one thing that is key in marketing and successful phishing that you have to do, stay consistent.

I know that Josh is not nixonhoward24@gmail.com, and even if I didn’t work for EmberTribe, it’s still very odd that someone named Josh is using an email that doesn’t have any part of his name or company in it. Using an info@ email would have been fine, and most consumers are used to it by now, but the inconsistency here is a glaring fact.

When consumers see inconsistencies, it causes brow raises—which in turn, causes suspicion. Suspicion is really the foundation of mistrust, and that’s the last thing you want from your audience.

So always make sure that you’re consistent. Whether you’re using a name and an email that make sense, or even making sure your company name in the “address” section of the email and email address in the “from” section match up.

Altogether, we hope these tidbits help you to improve overall conversions on your emails. Remember, it’s important to really think through why things work, and continue to test things so you can only get better and better results.

And to you, oh dear catfisher out there, you have to have better things to do (like wonder whether Carol killed her husband or not #TigerKing) then try and blow up our spam inboxes.

So get a better hobby.

P.S.: If you’re going to spam my inbox, at least make it entertaining. Like, where are the Tiger King memes or Tastey videos? Huge missed opportunity bud.