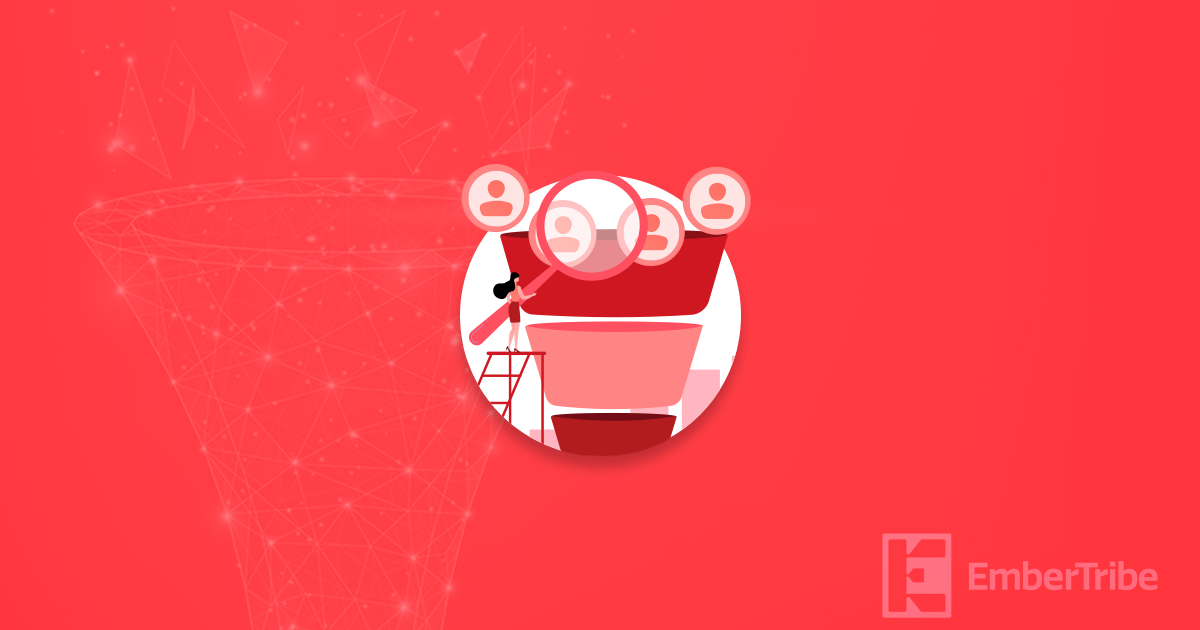 So you've probably heard of lead nurturing or building a funnel. A Funnel is a series of emails and content that goes out to turn people from strangers into friends for your brand.

Well, I want to show you that same concept that really works when it comes to your ads. And we've actually cut our lead costs down by up to 50% by building a funnel through retargeting.

🌲 Learn how to create an evergreen retargeting stack in Facebook Ads Manager. →

So I want to show you exactly how we did that and how you can put it to use really in an hour or less today.

We all know how important lead nurturing is.

Building trust over time, usually through a sequence of emails to get people to move closer to a buying decision.

But the truth is:

Even in the best-case scenario, that process is very inefficient. There's a lot of waste.

So we want to show you how to overcome that using retargeting. I'm going to use Facebook as an example but this equally works just as well on Google's remarketing platform.

Think about your traditional approach here and let's take a best-case scenario where you're sending people to a landing page and let's say your page converts at 20%. You're getting an ebook download or people are downloading something at a rate of 20%.

That still means that 80% of the people who visit that page left, didn't convert, and are probably never coming back again. Now you probably paid for that traffic or you worked really hard to get an organic ranking to earn that traffic. Whatever you did, there was a lot of effort involved and you're losing 80% of the people that visited that page.

Now, take it down to the next step.

The people who did opt-in, now you're emailing them. But maybe you only have a 20% or 30% open rate.

So you're losing even MORE people than you have people opening the emails but not clicking through.

This is what we call leakage.

Sounds kind of gross but this is leakage. You're losing people along the way.

So by the time you get people down to that bottom final offer where they become a lead and they're ready to talk to sales, your cost and the total volume of those leads has worsened over time.

So what we propose here is something that we've been doing here at EmberTribe.

It's been really effective, which is to take retargeting and run that alongside any of the offers, any of the lead nurturing efforts that you're running already through email.

Let me show you how this works:

You need three pieces of content to do this right. Now here's the first one that we did.

This works really well if you pick a vertical to serve. You know maybe it's healthcare or whatever it is for you. But pick a vertical and then give a very specific type of result. This is a great way to start.

Now we made it more specific to business to business and Facebook ads. But the idea is that you want to have a great piece of content that's easy on the eyes, it's interesting to read and this is like your top of funnel type of content piece here.

Now the second content piece would be something a little bit more specific, maybe to you and your company, like what we're using here is a case study of how we use Facebook for a B2B company to increase the number of users they acquired every month.

There's a spectacular result. We give a lot of details here and a lot of strategies and tactics that people can take away.

And now the third one is much more direct.

This is a call to action. 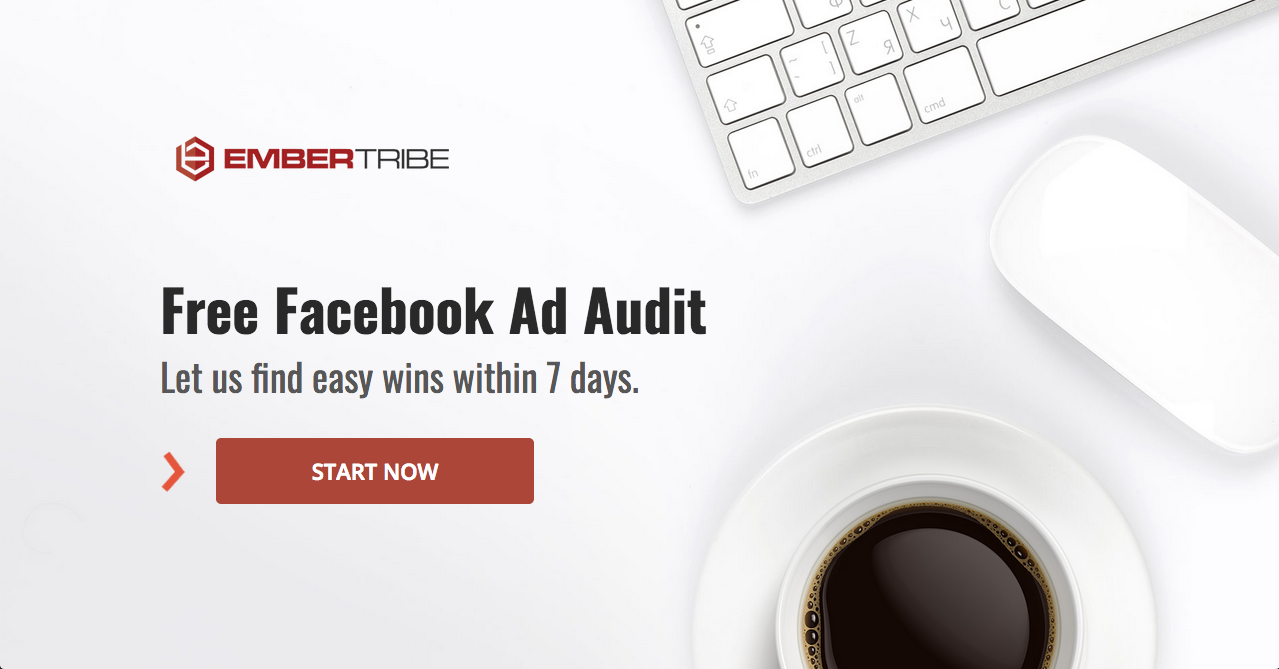 You can have as many steps as you want here. You can test things side by side. But even just to get started today, choose three pieces of content that you already have that meet that general criteria.

Now the next step is to build out what our custom audience is here on Facebook. And you probably have used custom audiences before to maybe load up a list of email addresses that you have and you create a lookalike audience.

But we're going to use website traffic as the option. And for the first step in our "funnel", we're going to choose the action here where people have visited specific pages but not others.

The URL that we want to include here is the first piece of our funnel. So this is the cool article. Usually it's vertical specific if you can. Put that in there. And then you actually want to exclude people who may have already seen this middle piece of content in your funnel. 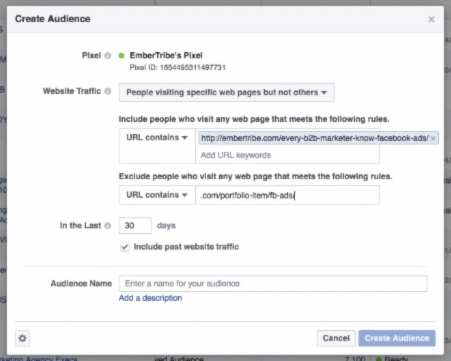 Now for the time period, just depends on how much traffic you have in your site. I say anything between 30 and 90 days is good. That's the time window that Facebook will use to measure the people who have viewed this content.

So the idea is to create a custom audience for anybody who's viewed that first piece of content.

Now the second is to create a lookalike audience in the same way for your middle piece of content except this time we're going to exclude the next step in the funnel. So go through the same process but just exclude that third or bottom funnel piece.

And then of course we can also create an audience for the people who have viewed this page but didn't convert. So maybe exclude the thank you page from whatever this leads to.

Okay so at this point you have three custom audiences, maybe four depending on how you slice it up and three distinct pieces of content to drive this process.

Now it's time to create some campaigns that can start driving traffic to each of these content pieces.

We're going to start at the top and you can see I have a campaign running here that's driving people to the top of funnel to read that B2B Facebook ads post.

We're getting about 20 cents per click. I want to see that come down. I think we can get it down to about 10 cents.

We're optimizing for traffic at this point. We're not optimizing for conversions. Because you want as many people as possible within our target audience to see this article. And the beauty of it is that this is something that people want to read.

It's the type of stuff that when they see it in their news feed, they're going to click through.

You can see that because we're optimizing for the click and the engagement with the article itself, we're getting a really good cost per click. And if you look at the Google analytics for this, we're seeing the time on site for these pages from this traffic source is really high. Five, six, seven, even 10 minutes of reading time because some of these are kind of long.

So the engagement is good, the cost is low, and you can see because we're getting people to engage with content and not necessarily opt-in, the overall costs are low. And you're going to see that flesh out at the bottom of the funnel.

The last step, I'm not going to walk you through the specifics right here, is you create a campaign where you're going to serve up this particular landing page.

Now this might come at a higher cost because we're optimizing for conversions.

But because we're doing it this way and we're not losing tons of people along the way, we're getting a much much lower cost per lead at the end of the funnel.

Now the beauty of this is that you're not trying to sell to strangers. You're warming up this traffic.

So you start with a really compelling piece and you build trust by showing how you've done this before with a case study. And then we're asking them to talk to us. If we just jumped right into this last step here, our cost per lead, it could be in the hundreds of dollars per lead. I'm just making up numbers. But by warming people up along the way, we're seeing that lead cost go down. Maybe to $25, $30, even $40 would be great because it's a much much lower cost than what we're used to seeing.

So the concept here is simple. Don't just rely on your email automation for lead nurturing. Run something in parallel with it like this so that you're not losing people along the way and you're not trying to sell to people who are cold, who are strangers, who haven't built up the trust yet with your brand.